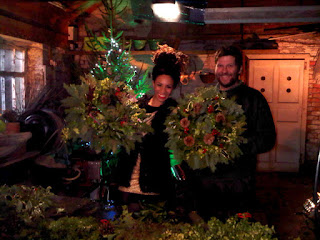 On 5th December a film crew from Blue Peter were at Chatsworth to film for their Christmas special. Head guide Heather Redmond took the crew on a tour of the Christmas displays, and was interviewed by Blue Peter Presenter Michelle Ackerley about the origins of Christmas traditions. Later on Michelle and the crew joined gardener Mick Brown in the potting shed to learn how to make Christmas wreaths. Mick helped Michelle to create her own traditional wreath, which she then accessorized using homemade stars. The Blue Peter wreath now hangs proudly on the door in the Vestibule between the Dining room and the sculpture gallery, so make sure to have a look when you’re in the house. The Blue Peter Christmas special is due to air on Monday 12th December at 4.30pm on BBC One.

Secrets, surprises and stories at Chatsworth this winter

Never miss a thing. Stay up to date with our latest news, offers and events by entering your details below: